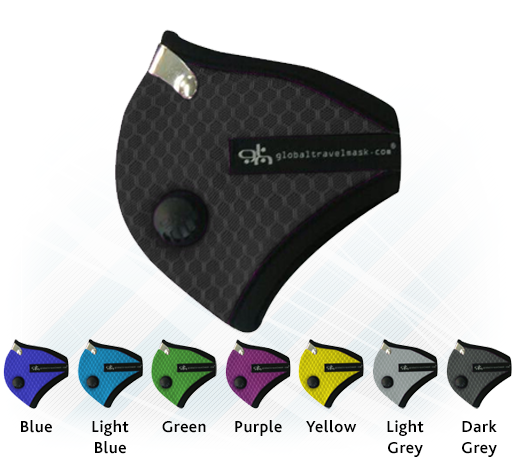 The Global Mask (GM) range is designed for use while travelling on airplanes or, for example, on the underground. In these instances, if just one person is contaminated with a form of influenza or other airborne microorganisms, the risk to the other passengers of becoming contaminated is much higher than in an open “clean air” environment. The Global Mask (GM) range provides an effective degree of protection for the wearer against microorganisms and contaminates while providing a high level of wearer comfort.
Global Masks (GM) consists of an eight layer system. Synergy of the eight layers is paramount to the whole system not only working as individual component but as a team working to provide the highest level of protection for the GM wearer. The performance of the Global Masks is between FFP2 and FFP3 (FFP2 and FFP3 is a European mask Filtration standard) and the most comfortable mask with this performance level available in the market.
LAYER 1: (OUTSIDE LAYER OF THE GM)
The first protective layer is an antimicrobial layer. This silver based technology goes back to the times ofthe Romans and Hippocrates, the father of modern medicine. It provides a barrier to inhibit microorganisms to cultivate and survive.
LAYER 2:
The second layer consists of the outer fabric carrying system. This holds all the layers together. It houses two exhalation valve systems and helps filter larger airborne contaminates. The Polyamide material has a low moisture absorbency capacity, which provides more wearer comfort than conventional masks. This layer also acts as a barrier for self contamination, generally by your hands.
LAYER 3:
The third protective layer is an antimicrobial layer which forms the outer defence of the changeable filtration system. It also assists in preventing antimicrobial growth inside the mask.
LAYER 4:
The fourth layer utilizes a polypropylene filtration media which forms the basis, if not the entirety of other conventional masks. Within the GM this layer provides the second physical level of defence against specifically microorganisms and, due to the density of its structure, certain types of airborne particles.
LAYER 5:
The fifth layer has been specifically developed for the GM. It contains activated carbon in the form of a mesh. This layer assists in absorbing unpleasant smells and contaminants from vehicles and industry. The use of carbon as a filter has been known for hundreds of years. The ancient Egyptians used the technology for both air and water sanitization.
LAYER 6:
The sixth layer is centre for GM’s main physical filtration system. It consists of the most advanced FFP2 filtration media currently available. It’s the work horse of the masks particulate removing system. Its sheltered by the other layers to ensure the maximum protection against airborne particulates and micro-organisms.
LAYER 7: (INSIDE LAYER AGAINST THE WEARERS FACE)
The seventh layer of the GM range utilizes a similar material as the fourth layer. Being close to the wearersface , the soft polypropylene has a very low absorption rate. Where perspiration from the we arer is minimalized, hence providing more comfort for the wearer.
LAYER 8:
The eighth and final protective layer is an antimicrobial layer which forms the inner defence of the changeable filtration system. This layer also provides protection from self contamination, prior to wearing the mask.
TWO EXHALATION VALVES:
The exhalation valves enable, easier outwards breathing and helps to reduce the build-up of gasses in the mask. As you breath in, the valves close and the filtration system filters the air. As you breath out, the valves open and enable you to exhale easier. This provides the wearer with greater comfort for prolonged use.
THE STORAGE BAG:
The storage bag is to be used for keeping the mask when not being worn. It also contains an inner and outer antimicrobial layer. This assists in the “self” cleaning capacity of the GM’s. It is recommended that only your GM is stored in the bag to maximise antimicrobial effectiveness.
For sizing, please visit http://www.globaltravelmask.com/sizing-guide.html